“…SHOULD HAVE A VOICE- A VOTE…” JEFFERSON County Sheriff Jim Adkins

“…SHOULD HAVE A VOICE-A VOTE…”

Spoke briefly with Sheriff Jim Adkins today while at the Jefferson County Commission Meeting about the Emergency Exit controversy.

“Feels the Ranch Residents should have a voice-a vote about the Emergency Exit” and added he “supports the need for an Emergency Exit.”

Though Sheriff Adkins supports the Emergency Exit concept he admits to not having all the specifics behind the Exit. “Unfamiliar with specific details.”

Interestingly, while Sheriff Adkins was testifying before the Commission today he mentioned how his sewer rates in Madras had gone up,”without a chance to vote on it.” 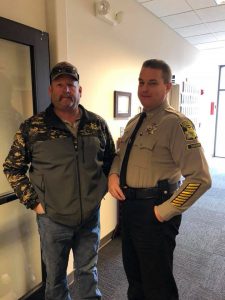