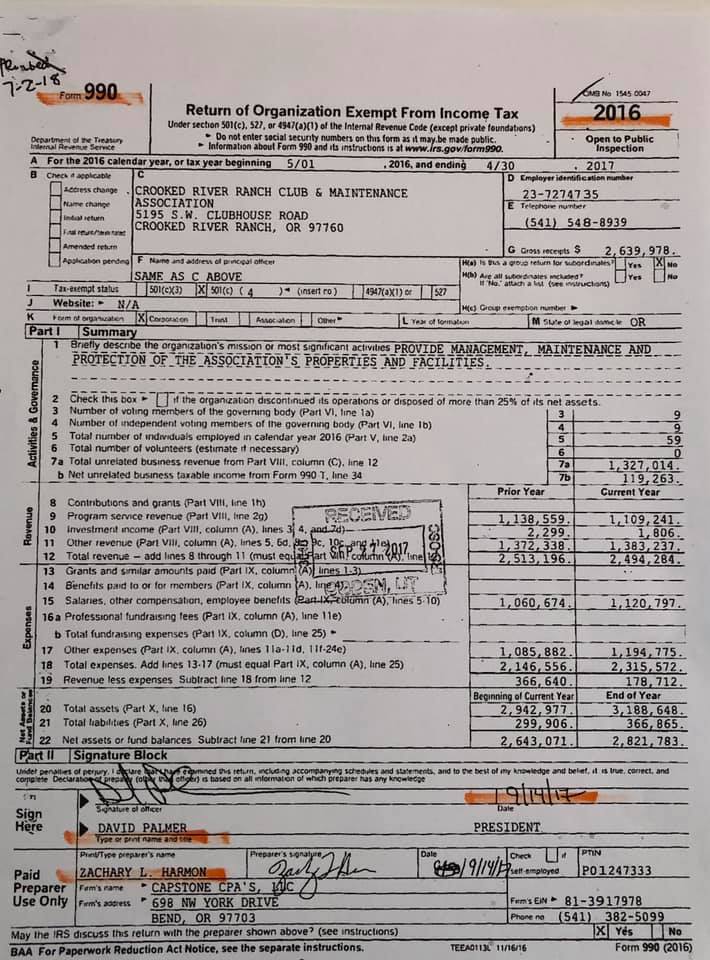 This particular 2016 Form 990 includes a SCHEDULE O-“Supplemental Information to Form 990” that includes subsections with questions. PART VI, LINE 7A, states: “ANNUAL ELECTIONS ARE HELD TO VOTE FOR BOARD MEMBERS…” Further, it states:

“A VOTE OF THE MEMBERS IS REQUIRED TO CHANGE THE ASSOCIATION BYLAWS.”

PART VI, LINE 7B, states: “IF CHANGES TO THE BYLAWS ARE PROPOSED, THE CHANGES MUST BE VOTED ON BY THE MEMBERS.”

“NO MEMBER POLICY VOTES OCCURRED IN THE CURRENT TAX YEAR.”

PART VI, LINE 11B discusses the REVIEW PROCESS and specifically states: “DRAFT COPIES OF THE FORM 990 ARE PROVIDED TO THE BOARD FOR THEIR REVIEW BEFORE THE RETURN IS FINALIZED.”

Every August Crooked River Ranch holds elections for Members of the Board of Directors along with other BALLOT MEASURES.

The August 2016 election cycle ran from August 1, 2016 through August 31, 2016, and according to former Ranch Vice President, John Williams, that election, “was one of the most important in the history of Crooked River Ranch…”. WHY?

The Ranch Officials were unhappy with how they had to govern the Association based on the BYLAWS at that time and placed on the Ballot, Measure 2, asking the Members to amend Article XVII, Section 1, of the BYLAWS by replacing the 2016 version of 50% plus 1, affirmative votes, of all eligible property owners, to “2/3 majority” of only votes cast. At that time at least 1300 plus eligible property owners represented the required voting quorum and that too stood in the Ranch Officials way. They knew if they could get what they wanted and amend the BYLAWS accordingly, they would finally be able to govern all Ranch Affairs via a very small number of select residents. “AFFLUENTS” 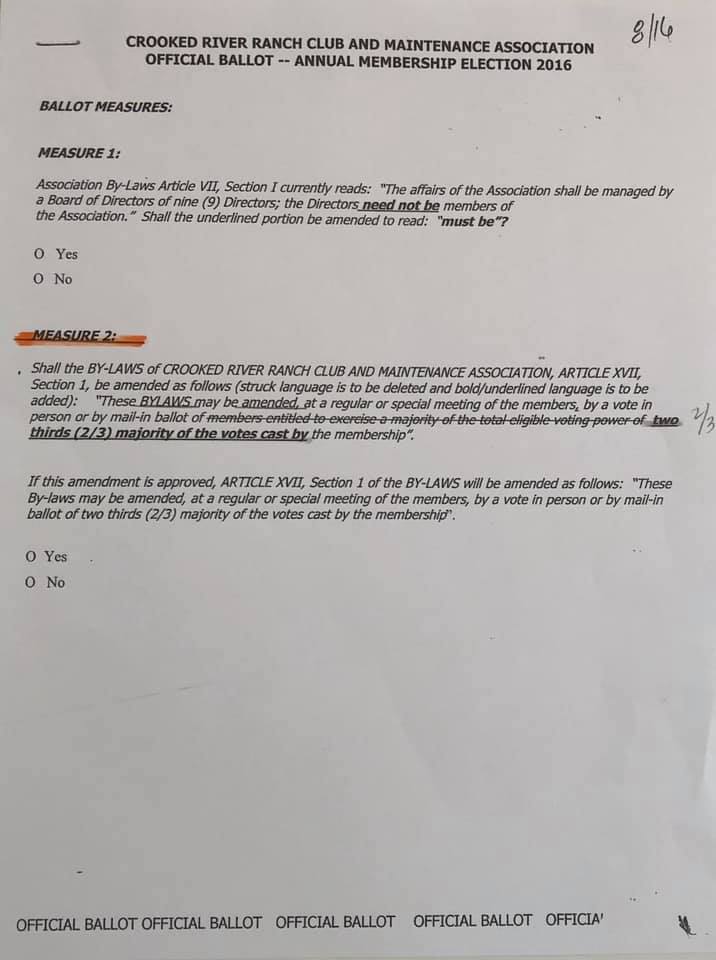 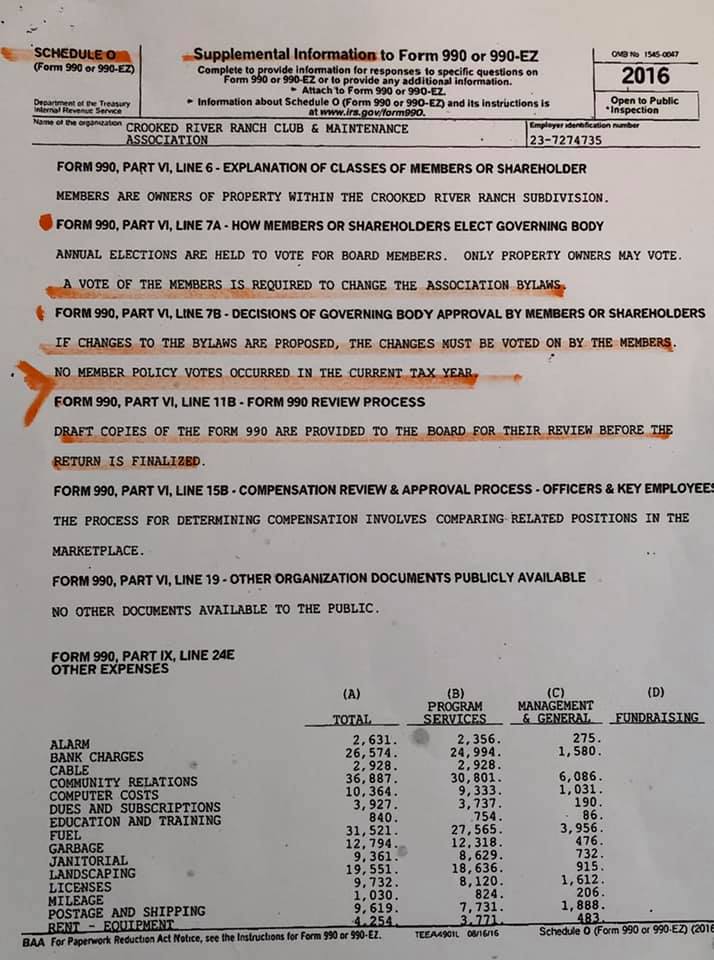 Continuing, on April 28, 2017, former Ranch President, David Palmer and former Ranch Secretary, Paula Bartolomei signed and recorded with the Jefferson County Clerk’s Office, the Official Record confirming there was an election in 2016 that AMENDED THE BYLAWS.
COPY OF RECORDED DOCUMENT 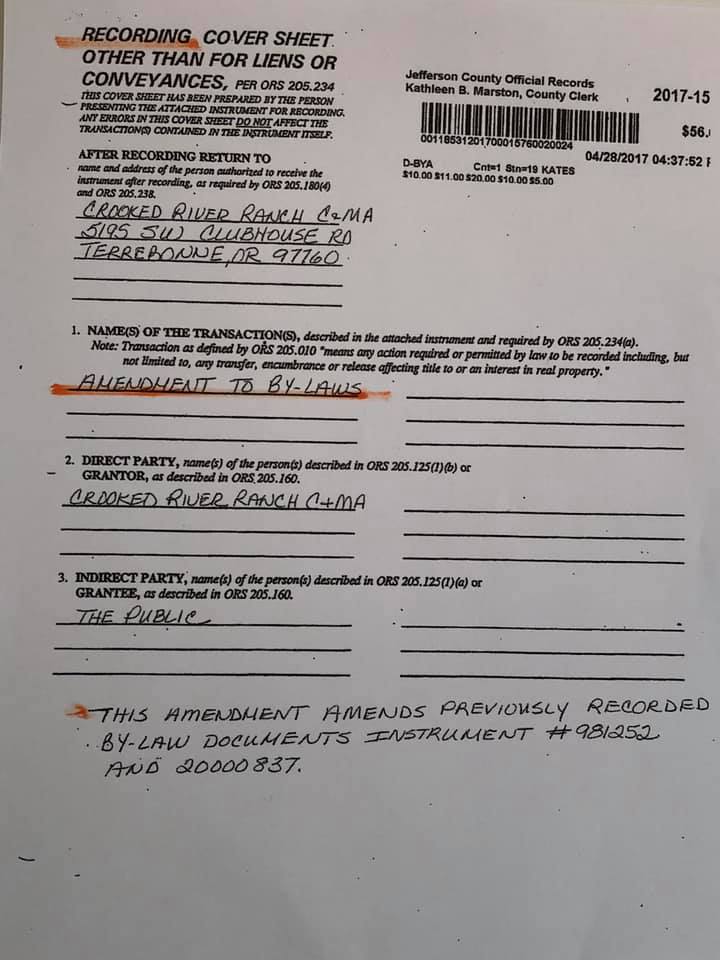 The following statement on the last page acknowledges and states: “We understand that management is responsible for the Association’s choice of filing Form 990 and 990-T and the consequences therefore.” 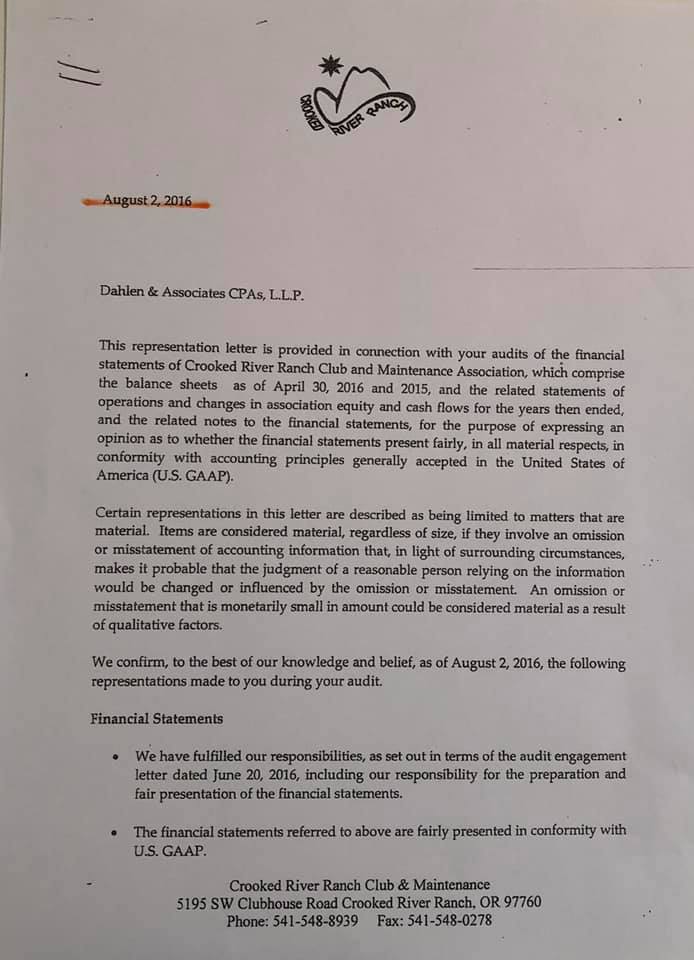 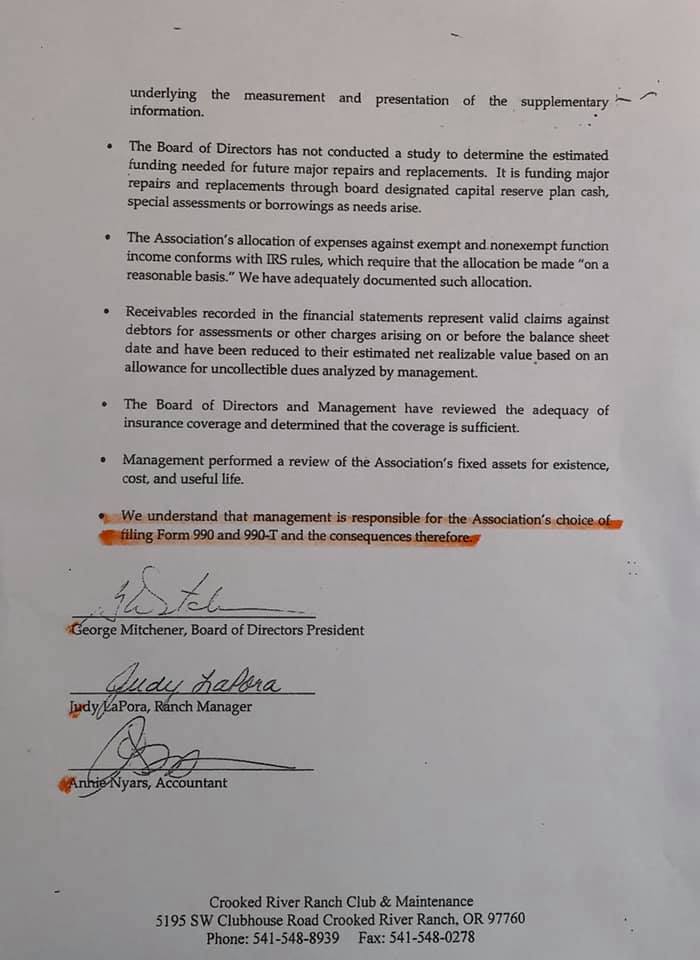