This morning, (Thursday, 1/18/18) we had an impromptu meeting with Chris Doty, Director D.C. Road Department regarding the Deschutes County role in the Emergency Exit Project. Several topics discussed.

Bim (Gander) is “the driver of this process”

“3 separate/total Applications have been submitted to the BLM.” The first Application was “written wrong and not good”-submitted by the Ranch. The BLM requested that Deschutes County submit the next or second Application/Draft followed by the current Application dated April 21, 2015

Bim Gander and SRD Director John Williams both have received copies of the April 21, 2015 Application

“Intergovernmental agreement” in the works and will be signed by the Ranch SRD and Deschutes County. The question regarding whether the SRD can obtain jurisdiction and Annex the Emergency Exit is still unknown

Underlying issues/concerns regarding the process Mr. Doty listed the following:

“Targets” to pursue if we are unhappy with the process: Ranch SRD, HOA and Jefferson County 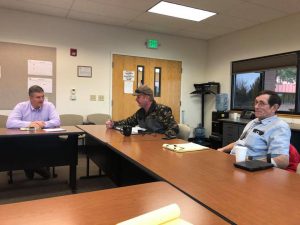